The current version of the German Corporate Governance Code is available here:

NEW WORK SE sets great store on the corporate governance regulations and is committed to ensuring the transparent, responsible management and supervision of the company. The joint Declarations of Conformity from the NEW WORK SE Management Board and Supervisory Board as laid down in Section 161 of the German Stock Corporation Act (AktG) regarding the German Corporate Governance Code (Deutscher Corporate Governance Kodex) are available below as a PDF file for download.

Download the Articles of Association of New Work SE now as a PDF.

Download the Remuneration Report of New Work SE now as a PDF.

Our Code of Conduct is our guideline in our daily work so we act with integrity and to safeguard our company.

Here you can download the Declarations of Conformity to date.

The Executive Board and Supervisory Board herewith declare that since the last declaration of compliance was submitted, NEW WORK SE has complied and will comply with the recommendations of the “German Corporate Governance Code” (“the Code”) in the version published in the Federal Gazette on 20 March 2020, with the following exceptions:

In derogation of the recommendation set out in point B.3 of the Code, Dr Peter Opdemom’s initial appointment as an Executive Board member is for 4 years, starting on 1 January 2022.

The Supervisory Board deems this derogation from the recommendation to be appropriate in view of Dr Peter Opdemom’s qualifications and experience. In addition, the Company considers initial appointments of four years for strategically relevant B2C Executive Board members to be in the Company’s best interests as they enable the best-possible implementation of long-term strategic decisions and goals.

C.1 Composition of the Supervisory Board – General requirements: specification of concrete objectives for the composition and preparation of a competence profile

A period of three years must pass before Executive Board members shall be granted access to long-term variable remuneration components. This period of time was agreed contractually between the Supervisory Board and the individual members of the Executive Board as per hitherto applicable legislation and provisions of the Code. The revision of the Code in terms of waiting period does not affect existing contractual relations. Furthermore, given the rapid pace of development in the Company’s field of business, the Supervisory Board considers a three-year waiting period to be sufficient for achieving the incentives put in place by the law and the Code which are designed to foster the Company’s long-term development. At the 2022 Annual General Meeting, the Supervisory Board will propose an updated remuneration system which would extend the period until which long-term variable remuneration components are paid out to Executive Board members from three to four years.

Cooperation between the Executive Board and the Supervisory Board

The Company holds the view that good and transparent corporate governance forms an integral part of its commercial success. The Executive Board and the Supervisory board place particular emphasis on a close, trusting and efficient working relationship with one another. Open communication and active and ongoing risk management are also fundamental requirements in this regard while orderly accounting and auditing are key aspects for corporate management aimed at ensuring sustained corporate success.

New Work SE’s Executive Board and Supervisory Board conduct their activities according to applicable law, the Company’s Articles of Incorporation, and the Company’s internal rules of procedure. With a few disclosed exceptions, New Work SE and its bodies follow the recommendations of the German Corporate Governance Code. In accordance with the law on equal participation of men and women in executive positions that came into effect in Germany on 1 May 2015, the Supervisory Board decided in March 2020 to strive for 16.6% female participation in executive positions. This figure has already been met. In addition, the Supervisory Board has also stipulated female participation of 20% for the Executive Board. This figure has also already been met. The Executive Board agreed to strive for 30% female participation at upper management level. At present, this figure has been exceeded by a considerable margin.

The New Work SE Executive Board is led by an internationally experienced management team, and is currently made up of five members.

The Executive Board is aware of the high degree of responsibility it bears vis-à-vis employees, members of the New Work platforms, and the general public, and undertakes its activities with great care.

The Supervisory Board has formed a three-person audit committee from among its members. Ms Weber is the Chair of the audit committee, which also comprises Dr Lübcke and Dr Rittstieg.

The audit committee is responsible for issues related to financial reporting, risk management, the internal management system and compliance. It monitors the financial reporting process and discusses the quarterly reports with the Executive Board prior to their publication. The audit committee also performs mandatory auditor independence checks, appoints an auditor, defines the main aspects of the audit, and agrees a fee with the auditor. The audit committee puts forward a proposal to the Supervisory Board for the latter’s auditor appointment proposal to be put to the Annual General Meeting. It also prepares the Supervisory Board’s decision with regard to the approval of the annual financial statements, consolidated financial statements and profit appropriation.

The product and technology committee has an advisory role and handles general questions related to products and market conditions, technical organisation, cost structures and working methods within a technological environment, and also evaluates current software and hardware trends.

The Supervisory Board and its committees are subject to annual self-appraisal to review performance of its duties. To this end, surveys are conducted systematically to question each Supervisory Board member individually about all of the key areas in the remit of the Supervisory Board and its committees. The results of the surveys are then collated and discussed in aggregate in the respective group. Suggestions to boost effectiveness are also discussed and put into practice where applicable. Where deemed necessary, external consultants may be commissioned to help with this.

New Work SE maintains an Investor Relations website for all shareholders and interested parties, containing detailed information on the Company in English and German. Annual and interim reports are published here immediately after being released. The financial calendar for the Company can also be found here, as well as current and old Declarations of Compliance according to Section 161 of the German Stock Corporate Act (AktG), Information on Directors’ Dealings, and information related to the German Securities Trading Act (WpHG). Shareholders can also retrieve information on the price movement of the New Work SE share on the website. Besides the conventional communication channels, the Investor Relations department at New Work SE also set up a separate Twitter account (NEW_WORK_SE_IR) to communicate all investor-related information about New Work SE. It includes regular updates for shareholders about the current share price trend and key corporate information.

The Executive Board and Supervisory Board believe that good, long-term Corporate Governance also includes an active and continuous risk management policy. Permanent monitoring and management of risk is one of the key duties of every public company. For this purpose, New Work SE has implemented an early recognition system in line with legal requirements and continuously develops it within the context of current market and company developments. The Group auditors inspected the functionality and appropriateness of the system, and confirmed. A complete risk report for FY 2021 can be found in the Annual Report.

Data protection and IT safety

Users of New Work services provide the Company with a great deal of personal data. In doing so, they trust that their data is processed and used for the intended purposes and in line with applicable law. As a result, New Work SE has high expectations of its own systems, particularly when it comes to meeting the data protection requirements of users, inspectors and data protection authorities.

The Company strives to uphold these high standards, and submits to regular inspections from independent external institutes in order to cast a light into the various technical aspects of the platform. 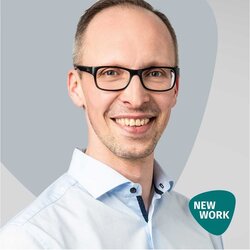